The condenser of a refrigeration plant is the element in which the refrigerant in the state of vapor heated to high temperature and high pressure, coming from the compressor, yields energy to the external means, to happen to state of subcooled liquid. The heat delivered by the refrigerant in this case will be equal to the sum of the work done in the compression and the heat absorbed in the evaporator.

Water-cooled condensers employ water as a cooling medium for the refrigerant. Condensation water can come from a cooling tower, from a swamp, a river and in the case of marine refrigeration facilities of the sea. In the case of using fresh water, filters are used to remove impurities that can contaminate the condenser tubes. In the case of using sea water the tubes must be of alloys capable of withstanding the potential corrosion that salinity can produce in addition, the condenser will be provided with sacrificial anodes. Another system to prevent corrosion is to use fresh water produced in the fresh water generator, which is cooled by sea water, as the cooling agent.
Water condensers, because this is a fluid with a high coefficient of heat transfer by convection, are more efficient than their air counterparts and therefore have smaller sizes for the same amount of refrigerant to be condensed. In contrast, the possibility of corrosion and fouling is greater in these capacitors as well as the possibility of freezing.

The immersion capacitors are formed by a metal casing pierced by coils, with high coefficient of transfer of heat by conduction, that contain the water. The water in this case circulates inside the tubes and gives heat to the refrigerant that accumulates in the liquid state in the lower part of the condenser. This capacitor therefore functions as a separator tank and allows the only liquid to enter the expansion device of the system. The condenser can be arranged vertically or horizontally and the tubes can be smooth or extended surfaces. The condensed refrigerant is collected in the bottom of the vessel, which all have a level and pressure indicator.

The double tube condenser is formed by two concentric tubes allowing the inner tube to circulate the water and the counterflow refrigerant through the outer tube. The double tube capacitors can also be arranged vertically or horizontally. This type of condenser is endowed with a spiral shape, which increases the turbulence of the fluids, facilitating their thermal exchange but, on the other hand, with loss of charge. The fact that the circulation is countercurrent allows the colder part of the refrigerant, the subcooled liquid, to exchange heat with the colder inlet water, while the hot part of the refrigerant in the gaseous state will exchange heat with the hot water protruding from the condenser.

In multitubular capacitors, the water circulates inside the tubes while the coolant gives up its heat from the outside enclosed in an envelope called calandria. The condenser tubes may be of extended or smooth surfaces and may be arranged vertically or horizontally. The tubes may be folded about themselves, U-shaped so that the water takes two steps before exiting the end of the envelope through which it has entered. At one end the water inlet and outlet is located while the refrigerant inlet and outlet is made by the top and bottom of the calender. 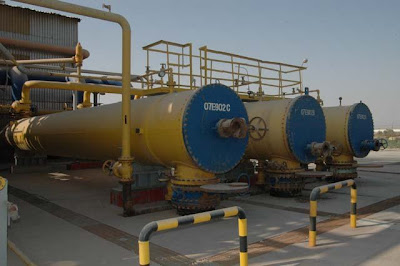 They simultaneously use water and air as condensing media; are composed of a coil that circulates the refrigerating fluid, a fan with its motor, spray nozzles, water distribution system, tank, water circulation pump and casing,

C ondensadores of lluvia.- capacitors rain, also known as condensers spray, or evaporative condensers open, consist of one or more rows of tubes through which circulates the refrigerant fluid, on which there is reason water is driven by the recirculation pump from the tank to the nozzles, where it is sprayed on the tubes of the coil, evaporating in contact with the circulating air and dropping the non-evaporated to the tank.

The cooling fluid yields heat for the evaporation of the water and to a lesser extent for the heating of the air
circulating through the condenser. During the condensation of the steam in the tubes, the heat released in the condensation is supplied
to them, and from them it passes to the water that falls in the form of rain. The water is not heated, since a small part of it is continuously evaporating; the heat required for this evaporation is taken from the water itself, which thus remains cold.
The produced water vapor is removed entrained by the air blowing on the condenser. The water is collected in a tray, from which it is again circulated by means of a pump; to facilitate the cleaning of the tartar the refrigerant coil is, usually

When water is not available in sufficient quantity or its lack reaches the point where an evaporative method can not be used, it is necessary to install an air cooled condenser in which the relative humidity does not intervene in its operation, if not only its dry temperature, which by logic, will be higher.
They are used in facilities of small size. They consist of a coil or set of normally copper tubes through which the refrigerant circulates inside. Welded to these and in a perpendicular sense are arranged aluminum foils whose function is to raise the heat transfer surface by radiation so these tubes receive the adjective of fins.
Normally in these capacitors the air is forced to circulate through fans that can be mounted in such a way as to either propel the air over the flanged tube assembly or draw the air through the condenser. With the air extraction system, ventilation at the ends is improved.
Air condensers can be static or forced draft. The most common are forced draft as increasing air velocity decreases the surface needed to perform condensation. These use different types of fans, the most usual are helical and motorbike centrifugal turbines
In this case the condensing temperatures will be higher than with the other condensers . At the same power, it will occupy more volume, although it is easier to install, its energy consumption is superior but equivalent to that of an evaporative system , but on the other hand, the maintenance is much less expensive , since it does not need water treatment.